One of Poland’s main tourist attractions located at Castle Square 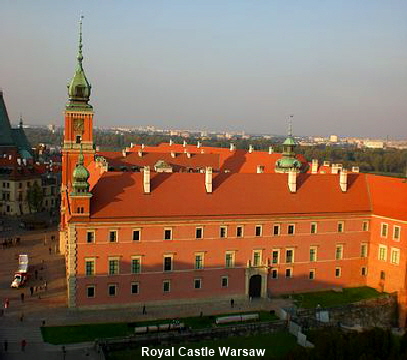 The Royal Castle (Zamek Królewski) dates back to the 14th century when a tower and wooden buildings stood here.
The construction of the Castle in its current form began towards the end of the 16th century. King Sigismund III. (Zygmunt III.) ordered the expansion shortly after Warsaw became the capitol of Poland in 1596.
Later the castle was expanded several times. King Wladyslaw IV. built the Wladyslawowska Tower (in the courtyard) and King August III remodeled the outside of the castle facing towards the Vistula and the wing facing towards the north.

The largest modifications were done by Poland’s last King Stanislaw August Poniatowski after he came to power in 1764. He changed several things inside the castle and built the south wing.
In the Second World War a huge part of the castle was damaged in 1939, later in 1944 the remaining parts were destroyed.
Today’s Royal Castle is a reconstruction of the old castle. Fortunately lots of original details can still be seen today as they had been kept at a secure location during the war. The decision to rebuild the castle came in 1971, so that the reconstruction took around 50 years from its destruction. 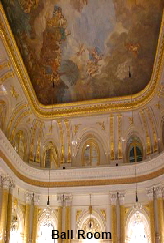 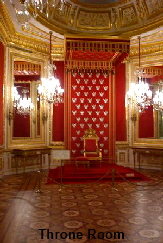 Visitors may look at the inside of the Royal castle, this attraction is also referred to as the Castle Museum.

The main sights inside the castle

The Ballroom (Assembly Room) was already constructed under August III., but it was Stanislaw August Poniatowski who decorated it the way it looks today. It is the most beautiful room with its columns, mirrors and chandeliers. 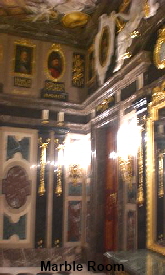 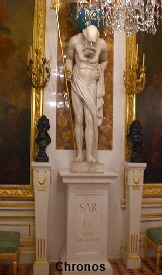 Another impressive room is the smaller Throne Room with a throne standing in the middle of one side. It dates back to Stanislaw August Poniatowski. Shining red and gold makes it lovely place to spend some time. This room is connected to another small room at back containing the original floor.

The Marble Room was constructed during the reign of Wladyslaw IV, later portraits of Polish Kings were added to the room. Do take a look at the wonderful paintings on the ceiling. 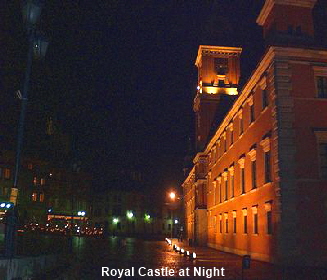 The Canaletto Room hosts paintings by  Bernardo Bellotto done in the 18th century.  The pictures show scenes from Warsaw and are as detailed as one would expect from a picture. It is worth planning to stay here for a while to explore what Warsaw looked like back then.

The Knight’s Room was furnished under Stanislaw August Poniatowski. The walls are covered with huge oil paintings and in the middle if the room one can see the Statue of Chronos. 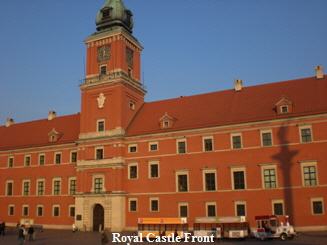 The King’s Bedroom is a pretty room with a rather small bed constructed in 1775.

The Senate Chamber plays a huge role in Poland’s history, as the first Polish Constitution was ratified here on May 3rd 1791. Another throne can be found here by the way.

Location
The Royal Castle is situated directly at the southern part of the Old Town at the Castle Square (Plac Zamkowy) in the heart of Warsaw. The castle can be reached by bus or tram. If you intend to use the metro, switch to bus or tram at Ratusz Arsenal heading in direction Praga and get off at the next stop.
Bus 125, 170, 190, 307, 512 or
Tram 13, 23, 26, 32. 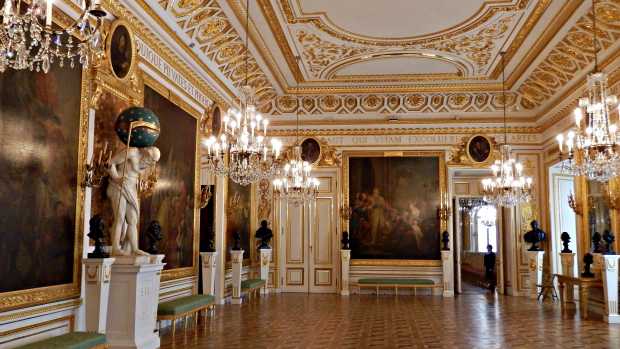 A German version can be found at: warschau.info